Once upon a time, I realized I had to organize a bridal shower for my sister. No big deal, just food and drinks right? Oh and a few games. Hm I guess there should be a theme of some sort… something she really loves. Like the movie The Princess Bride, for example. (If you haven’t seen it, educate yourself.)

So I sent out this invitation: 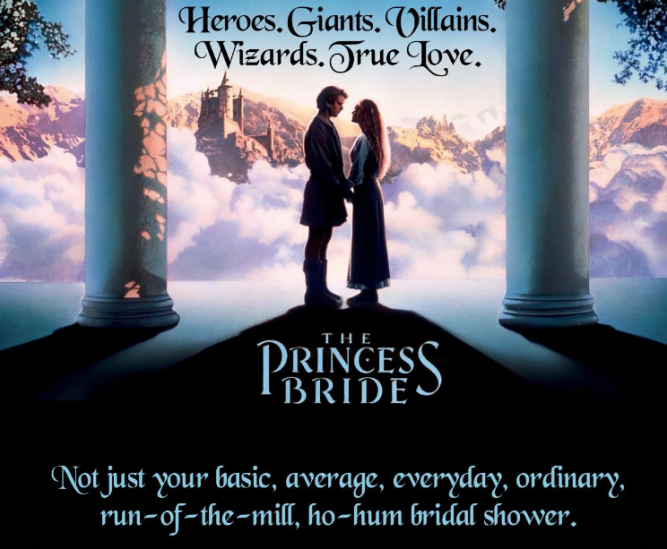 … and then realized that I had just set the bar quite high for myself. But there was no turning back now. So I pulled up my bootstraps, marched into Michaels for the first time in about 12 years, and got to work. Spoiler alert: it turned out pretty awesome.

Our guests were first greeted by some helpful directions out front, in case they wanted to know where to wrestle Rodents Of Unusual Size, or catch fire.

Then had famous quotes from the movie all over the house. 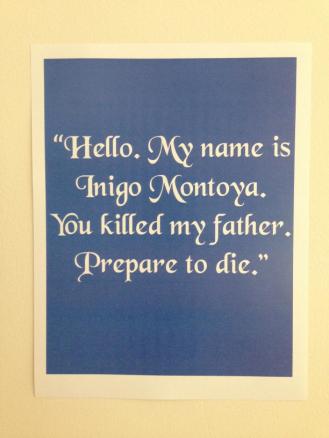 We came up with a menu inspired by locations (and wildlife) from the movie: Screeching Eel Sushi, Cliffs of Insanity Nachos, a selection of cheeses from Florin, Lightning Sand Hummus and R.O.U.S. Ham. And of course we finished off with some Iocane Brownies.

Some extra fancy toothpicks for people to stab their cheese or olives with, which I found here.

Cake with an “As You Wish” cake topper that I found here.

And because we’re not above day drinking at a bridal shower, there was also a special drinks menu:

Using some string, gold markers and banners from Michaels, we made some bunting that spelled out “As you wish” and “Inconceivable!”

Of course we played some games, including a “Battle of Wits” trivia about the bride and groom, and a scavenger hunt for a bottle of iocane powder. (I found the powder here.)

We sent the party people on their way with some chocolate favours, obviously from Miracle Max.

But the bride’s favourite part was at the end: as we were wrapping up with gifts, she had a surprise visitor – the Dread Pirate Roberts. Her fiancee, god bless him, agreed to dress up and surprise her. (No photos, sorry – couldn’t do that to the poor fella.)

Hope you Princess Bride fans found this helpful – would love to hear from you in the comments!