The night I accidentally became a groupie.

“We’re just here to see the opening band,” said no one ever.

Except for Katey and I that is.

Yeah, so on March 3 some band called White Denim was playing at Horseshoe Tavern and we were all “that’s cool” but OMGZ THE DISTRICTS ARE OPENING FOR THEM!!!

(Note: Upon further investigation, it would appear that White Denim have 44,000 Facebook fans, are playing at Osheaga this year, and were on Jimmy Kimmel a week after we saw them. We may or may not have told them that we were just there to see the opening band, but they “turned out to be pretty good too”.)

At the tender age of 18, I would think the band members would barely have gained the strength to hold up their own heads, never mind headbang. But no. The talented little babies rocked on.

In all seriousness, it’s absolutely inspiring to see such a young band exude SO MUCH passion. It reverberates from them in droves, palpable as the beer on our tongues. They played their instruments with closed eyes and didn’t miss a beat, while the lead singer approached the mic like a bull in heat, bleary-eyed and woozy with lust. His voice was raspy, strained and beautiful.

Also, we kinda sorta had a slumber party with the band.

Katey and I talked with the guitarist after their show and told them how awesome they are, yadda yadda yadda, we piled into their big white van with their manager and photographer in tow, and began the party around 1am.

Did I mention this was on a Monday night?

We drank red wine, chatted about everything from rent prices to the best Starburst flavour, then ordered pizza (which was gone in about 3 minutes. They ARE growing boys after all). We were up until 4am and I was delirious with exhaustion the next day. Worth it!

Plus, I get to keep this little memento: 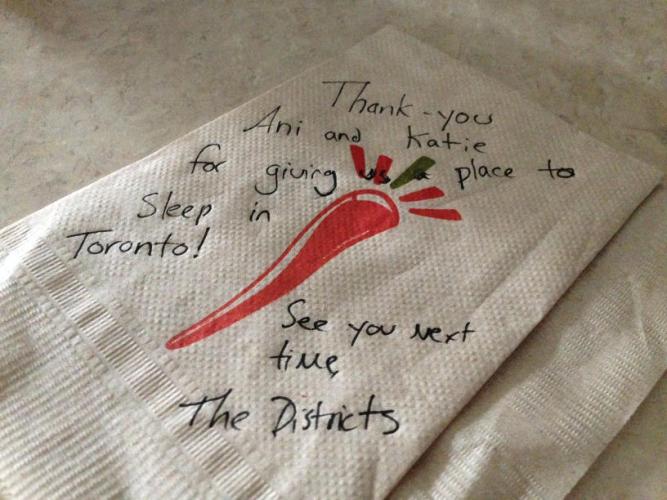